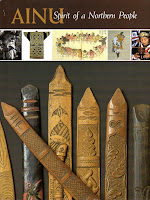 The most important article of spiritual and artistic carving was the ikupasuy or prayer stick, which assisted in taking the men's prayers to the land of the kamuy gods. They were carved from yew, willow, or spindle wood, and were usually twelve to sixteen inches long and two to four inches wide. They had rounded edges and were tapered at one end. The majority of these sticks were basically flat, but they were carved with multi-leveled relief designs that ranged from incredibly complex to quite simple.

The ikupasuy was one of the rare exceptions to the rule that the Ainu did not depict people or animals in their decorations for fear of angering the gods. Carvings on the prayer sticks included representations of bears, killer whales, seals, fish such as salmon and swordfish, birds such as albatross and ducks, snakes, and flowers; or objects made by human hands, such as boats. Markings at each end of the ikupasuy identified the carver's clan so that the gods would know who the prayer had come from. Hours of thought and energy went into making the prayer sticks, and if you ever find one for sale, chances are it is a replica carved by a non-Ainu, and thus not considered sacred by the Ainu.

Traditionally, the most important duty of an Ainu man was to carve the inaw. Inaw are the sacred shaved sticks that symbolize birds, and which were believed to deliver human prayers to the gods or chase away demons. Carving inaw involves stripping the outer bark from a tree limb (often willow or dogwood), then shaving the wood underneath so that it forms bunches of paper-thin curls attached at one end. This is time-consuming work and requires both a steady hand and a special carving tool called an inaw-kemakiri. The design and shape of the inaw depends on the particular god to which the prayers are being addressed, and the ceremony in which they are going to be used. Once used, they are never reused, but left where they have been placed until they fall into decay (or burned, if the inaw is for the fire god) after a single use. Inaw have a graceful, understated beauty that contrasts with other Ainu designs, which tend to be visually "busy" and stimulating. (ref: Ainu: Spirit of a Northern People and Sapporo Pirika Kotan museum)
Posted by dosankodebbie at 3:37 PM