what does iomante mean for modern-day ainu? 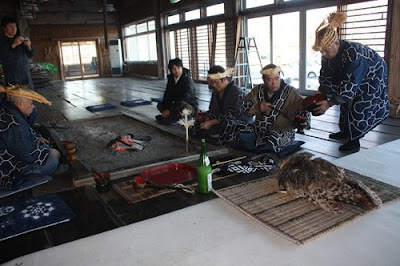 Iomante (or Iyomante), the controversial "Bear-Sending Ceremony," which is so sensitively depicted in our most recent storybook translation (The Ainu and the Bear~the gift of the cycle of life; RIC Publications; 2010), is bound to upset some readers. We realize this, and sympathize. A newborn bear cub is torn from its mother (at the cost of the mother's life) and raised with tender care by a village, only to be killed in a ceremony that releases its spirit from the human world so it may return to the spirit world from which it came. The book does not advocate the practice. It simply explains how the custom fits into the traditional Ainu worldview, and attempts to show that within that worldview, the practice makes some sense, and is not meant to be a cruel one.

In 1955, Iomante was outlawed in Japan as barbaric, but the prohibition was rescinded in 2007. Does this mean the practice will be revived among the Ainu? Not likely. The ceremony has already been documented in detail on film for the historical records. The need for bear meat and bear skins in daily life is a thing of the past. Furthermore, the bear population of Hokkaido is declining at an alarming rate with the spread of urban areas.

So what does the right to practice Iomante mean to today's Ainu? I have been looking for hints of the answer to this question for some time now, and was intrigued by a recent news article about a sending ceremony conducted for the shimafukurou (Blakiston's fish owl). The shimafukurou is traditionally regarded by the Ainu as the guardian of the village. In some areas of Hokkaido it is the highest-ranked Ainu god, while in other areas the bear ranks higher. The sending ceremony for the owl is similar to that for the bear.

According to the news article, the dead body of a fledgling shimafukurou was found on a rural highway in the Hidaka area of Hokkaido on December 25, 2009. From the ID bracelet attached to its leg, it was identified as a juvenile that had been released into the wild just six months earlier by the Ministry of the Environment. The MOE is involved in breeding this endangered bird to circumvent its extinction. Even fledgling shimafukurou have wing spans that can exceed one meter (three feet), while the fully mature owls can be more than two-meters (six feet) from wingtip to wingtip.

The man who discovered the dead owl, the president of a construction company and member of the Hidaka branch of the Hokkaido Ainu Association, was reported as saying, "I knew at once it was no ordinary bird. There were the half-eaten remains of a duckling nearby. The owl must have brought its meal to the road to eat, and then gotten hit by a car." That same day, before returning the bird to the MOE, the Hidaka branch of the Ainu Association conducted a "sending ceremony" (Hopunire) to send the bird's spirit safely back to the spirit world. The subtle differences in meaning between Hopunire and Iomante seems to depend on the geographic origin of the speaker, but for the purposes of this blog post, the difference is insignificant.

I have also read that Iomante has been conducted in recent years for bears that die in captivity, such as those reared at the Kuma-bokujou bear park in Noboribetsu, one of the areas in Hokkaido where people of Ainu descent are concentrated. In these, and perhaps other ways, it appears that the tradition of Iomante is being preserved and carried on by modern-day Ainu.

See original news article about the sending ceremony for the dead owl (Japanese).
Posted by dosankodebbie at 4:40 PM