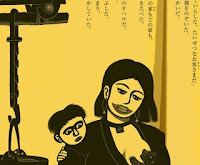 I am almost finished with the rough draft translation of Iyomante~Meguru inochi no okurimono, which, as I blogged previously, has been approved by the Ainu Foundation for a publishing grant. Completing the rough (first) draft is always an important milestone. It will take many many more re-writes before I even show the manuscript to my team members, and more re-writes will be needed after I receive their feedback. But the road to this first milestone always feels the hardest part of the journey. This particular book is about the controversial subject of Iyomante, the "bear-sending" ceremony, arguably the most sacred of Ainu ceremonies. It has often been regarded by non-Ainu as a barbaric practice and was eventually outlawed by the Japanese government. The Bear Festival as practiced in modern times no longer includes the ritual killing of a bear cub. This storybook, however, deals with the subject from a traditional Ainu perspective. It is quite sensitively done, giving us a glimpse into the Ainu world view through the eyes of a young Ainu boy and the bear cub he helps to raise, a cub which is destined to be "sent" in the next Iyomante. There are a number of tricky spots in this book when it comes to translating with English-speaking young readers in mind, even apart from the potentially upsetting scene of the bear being killed. One is the reference (with illustration) to the boy's mother nursing the orphaned bear cub at her own breast. Until it was old enough to be "sent," the infant bear chosen for the Iyomante lived in the Ainu community as an honored guest, or beloved family member. This extended even to being nursed by Ainu women until it was old enough to be weaned. The illustration posted here shows such a scene. I only hope western readers will accept it in its context and not be offended. In my next blog I hope to comment further on how much you can learn about Ainu culture just from the illustrations in the book.
Posted by dosankodebbie at 3:05 PM