Paper Tigers Blog is the blog branch of Paper Tigers.org, a website about multicultural books in English for young readers, focusing primarily on the Pacific Rim and South Asia. Recently an article on the Ainu oral tradition was posted on the blog, in which credit is given to Project Uepeker for some of the information in the post.

I have been thrilled in recent years to observe the gradual spreading of awareness about the Ainu among ordinary (i.e. non-academic) people with a healthy curiosity about the world we live in and a respect for unfamiliar cultures. Blogs have played a huge role in this spreading awareness, and that's one of the reasons I enjoy discovering new ones and introducing them here. I was particularly delighted to discover Paper Tigers because it shares my own enthusiasm for storytelling traditions and a commitment to support the preservation of such traditions in the form of books for young readers. Paper Tigers was chosen by the American Library Association as one of the "Great Web Sites" for Teachers, Librarians and Parents. Do check them out!
Posted by dosankodebbie at 6:14 PM

ainu yukar to be published in tomo anthology

TOMO, an anthology of short stories with particular relevance to teens, will be released this coming March from Stone Bridge Press. Its aim is to bring Japanese stories to readers worldwide, and in doing so, to help support young people affected or displaced by the March 11, 2011 Japan earthquake and tsunami. Proceeds from the sales of this book will go directly toward long-term relief efforts for teens in northeast Japan, the area most affected by the disasters.

My translation of the Ainu folktale, "Where the Silver Droplets Fall," accompanied by two simple etegami-style drawings, is included in this book. As one of the contributors to the anthology, I was interviewed on the TOMO blog. In the interview, I share a bit of my personal background and what led to my becoming a translator of Ainu folklore. But more importantly, it gives a glimpse into the life of Chiri Yukie, an Ainu teenager who struggled to value herself and her cultural heritage, at a time when both were despised by mainstream society. By the time she died of heart failure at the tender age of nineteen, she had become a forerunner of a movement to save her people's oral tradition from oblivion. Click here to read the interview.
Posted by dosankodebbie at 2:23 AM 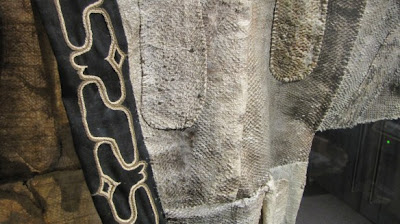 I stumbled across some great photos on Kenji Dubois Lee's weblog that are the next best thing to actually visiting the Ainu Culture Promotion Center in Sapporo. Some great close-ups, too, like the attached photo showing a robe made from salmon skins. Please take a look at the original blog post. Thanks, Kenji, for sharing these with us!
Posted by dosankodebbie at 7:26 PM

Quite frankly, this is a book I wish I had written. The scholar who has this honor, however, is Sarah M. Strong, professor of Japanese at Bates College in Lewiston, Maine, and I am sincerely happy that a book covering the life and work of Chiri Yukie with such thoroughness and depth is finally in print.

The Preface can be downloaded as a PDF file from this page.
Click here for a detailed description and reviews of the book. It was released just this month from University of Hawai'i Press, and can be ordered from the aforementioned link or from Amazon US.

Posted by dosankodebbie at 12:51 AM 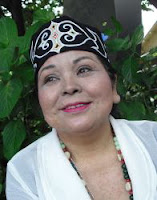 For years, Tamiko Kumagai lived in fear of revealing her Ainu roots. But several months after the Great East Japan Earthquake, when she was told she had less than a year to live, she became determined to embrace her roots and help earthquake victims do the same.

Click HERE to read the rest of the article.
Posted by dosankodebbie at 5:55 PM

the sad song of okinawa 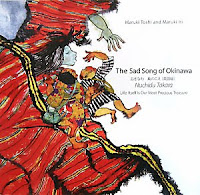 The Sad Song of Okinawa~Life Itself is our Most Precious Treasure is the heart-wrenching story of the Battle of Okinawa, "World War II's longest and fiercest battle," as told from the perspective of two young Okinawan children. It is in the form of a picture book for young readers, but certain to stimulate discussion among all age groups about the nature of war and peace. The original Japanese version was meticulously researched, written, and brilliantly illustrated by Maruki Toshi and Maruki Iri, a husband-wife team of artists whose work is known and respected worldwide.

The story begins with a delightful description of the beauty and joys of life in Okinawa, with the impact of the text multiplied by the vivid colors and whimsical illustrations. Young Tsuru and her even younger brother Saburo live in this joyful land along with their parents and extended family.

After impressing this charming setting firmly in the reader’s mind, the text continues: “The war came to Little Tsuru’s house when she was seven years old.” In both great and small ways, the life to which the children had been accustomed begins to crack and crumble. The illustrations become darker and more chaotic. Though the text continues in a matter-of-fact tone, the scenes that the words describe make your hair stand on end. The desperate reality of the situation is enhanced by many innocent-seeming details, such as what the evacuees choose to take from their homes as they flee, and the color of the mud puddle that the children must drink from to quench their raging thirst.

The Okinawan language, particularly in the form of a song Grandfather sings to the accompaniment of the sanshin (Okinawan banjo), weaves through the text, adding further continuity to the story. “Ikusayun shimachi, mirukuyun yagati, (the war will pass and there’ll be days of peace and pleasure) Nagikunayo shinka, nuchidu takara ( Don’t cry my friends, life itself is our most precious treasure).” The story ends with a repetition of this last phrase (“life itself is our most precious treasure”), which also serves as the book’s subtitle.

The publication of the English version of the book was made possible by the efforts of The Sad Song of Okinawa English Translation Project. It took three years for the project team to raise the funds necessary to get it published. Project members Kinjo Haruna, Andrea Good, and Rob Witmer undertook the translation of the original Japanese (and Okinawan) into English.

I'm pleased to say that the book is finally in published form as part of the RIC Story Chest series. As all books in that series, The Sad Song of Okinawa comes with a CD recording of the story text to assist young readers and speakers of English as a foreign language. Two Okinawan folk songs performed by Nahgushiku Yoshimitsu are also included in the CD. The book can be purchased from RIC Publications or from Amazon Japan (under its Japanese title).

Posted by dosankodebbie at 3:24 PM

no reservations visits the ainu in shiraoi

Anthony Bourdain and his TV show No Reservations, a travel and food program that is uber-famous in the United States (and elsewhere), have shot episodes of their program in Japan many times. But this winter, they visited Hokkaido for the first time. The video posted here is the second of three parts. The latter half of the video covers Tony's visit to the Ainu community in Shiraoi.
Posted by dosankodebbie at 8:25 PM 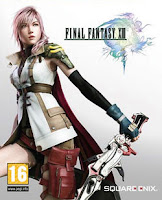 This post is a slightly edited version of a recent post in the "Humanizing the Quake" series from my Etegami Blog. The images attached here are actually part of my illustrated recipe series, but I felt that they could serve to remind us that Japan is a multi-cultural nation, despite what most Japanese kids are taught in school, and despite the occasional nonsense spouted by certain politicians. The recipes represent two prefectures which have cultural traditions that are outside of the Japanese mainstream. Hokkaido, in the far north, and Okinawa in the far south.

The first recipe posted here features a wild plant that is commonly called ainu-negi (Ainu leek). Life in Hokkaido is rich with the legacy of the Ainu, the indigenous people of northern Japan, but if you are a regular reader of this blog, you already know that. This legacy can be found in our local dialect, our food culture, our place names, and our worldview. Though the numbers of ethnic Ainu have dwindled, they are vocal and active, and contribute positively to modern Japanese society, economy and government.

To the far south, Okinawa prefecture has a somewhat complicated history as the Kingdom of Ryukyu prior to becoming an official prefecture of Japan in 1879. Their architecture, crafts, food culture, and traditional language is different from that of any other area of Japan. The second illustrated recipe, Goya Champuru, is an Okinawan dish that has become popular all over the country.

Apart from the peoples mentioned above, all over Japan there live permanent residents and naturalized citizens who are not ethnically or culturally mainstream. Some of us have lived here for many generations. Our lives are rooted here. We lived and died in past and present earthquakes and tsunamis. The burden to rebuild Japan is our burden too, and we bear it with pride.
Posted by dosankodebbie at 11:56 PM

Posted by dosankodebbie at 5:10 PM